A Swim Around Hampstead Heath

‘A really well-produced, rewarding book. Text and marvellous illustrations capture the joys, punishments and unabashed delights of bathing on the Heath. Well worth dipping into’
– Michael Palin

‘I loved Taking the Waters. It will appeal to swimmers and non-swimmers alike, and to anyone with a love for the offbeat’
– Tracy Chevalier

Taking the Waters is sadly now out of print, but copies are available through Amazon

Taking the Waters is a celebration of four unique swimming spots on Hampstead Heath: the Kenwood Ladies’ Pond, the Highgate Men’s Pond, the Mixed Bathing Pond, and the Parliament Hill Lido.

People have swum at the ponds for over 200 years – from champion swimmers and world famous divers, to international film stars and hardy year round bathers – while the Lido is one of London’s few remaining outdoor pools. Together they attract over a quarter of a million visits a year.

The idea behind this book was to find out how and why the ponds and the lido came to be, and what stories they have to tell. It brings together personal memories, archive images and stunning modern photography by Ruth Corney. (see more of Ruth’s work on her website)

The story behind the book

The Highgate Men’s Pond and the Kenwood Ladies’ ponds are the only life-guarded open-water swimming places in the UK to be open every single day of the year. But when I started this project I was pretty clueless, I just thought, well they’re ponds; they’ve been here forever…

As a child, I used to be dragged moaning across the Heath by my dad every single Christmas morning, to watch the annual race at the men’s pond. I had no idea this tradition had been going on since the 1890s. As a teenager, a lot of my summers were spent at the Ladies’ Pond. I remember how comfortable the women were with themselves. How strange it was to swim with the ducks. And how when I got out of the water… there was always a ring of muck on my neck.

It felt daring, in the winter, to climb over the railings, clutching a thermos of tea, ready to break the ice in order to get in. There were lots of scary rumours at the women’s pond. Like the giant pike that could bite your leg off. And ghostly bodies down in the mud. But really it was just a place to hang out with friends, especially on the raft.

I never gave the lifeguards much thought. They seemed old and bad tempered to me. I just tried to avoid getting a telling off for being too noisy. Then, when I started this book, I realised there was an incredible history here I’d never known about.

Media coverage for Taking the Waters

And on Country Tracks

4* With so much already written about north London’s most beloved green space, it’s hard to think what else there is to say about Hampstead Heath. Yet Caitlin Davies and photographer Ruth Corney have risen to this challenge with spectacular success, their words and pictures evocatively conjuring the pleasure of swimming outdoors… An enjoyable, refreshing read for those impatiently waiting for summer to kick in.
– Time Out

It’s terrific, I was totally immersed. Loved it!
– Melvyn Bragg

Whether you’re passionate about the Hampstead pools (as clearly many people are), or wouldn’t touch them with someone else’s bargepole, you’ll find plenty of fascinating history, politics and sporting endeavour in the pages of this book. We suggest you pick up a copy, put together a hamper, toddle along to the lido and enjoy this book cover to cover by the poolside.
– The Londonist

I defy anyone not to find some pleasure in the pages.
– The Kentish Towner

Read Ruth’s story behind the book, written for the Outdoor Swimming Society

Henley Swim offered the book as a competition prize in their newsletter, January 31st 2013, and on their website.

‘For readers who are familiar with London’s myriad of attractions this is one of the most fascinating books to have on your bookshelves.’

Listen to Ruth talking about swimming at the Kenwood Ladies’ Pond on Woman’s Hour, June 2013: 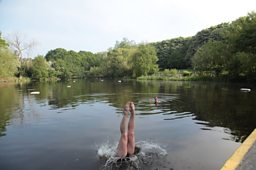 In the next in our series about women and swimming, we visit North London for a dip in the Kenwood Ladies’ Pond on Hampstead Heath. Woman’s Hour reporter, Louise Adamson, meets up with Ruth Corney, who has taken photographs for a new book about swimming on the Heath. Ruth swims at the pond all year round, even in winter, but Louise met her on a warm Sunday morning in early summer.

Talks about the ponds

The history of the bathing ponds, Highgate Library, with Ruth Corney, October 18, 2012

An exhibition of Ruth’s ponds and lido photographs was held at the Camden Local Studies & Archives Centre in the winter of 2013, with captions and historical background from the book.